Excuse Me While I work

On a list Poem for class. And just to vent..let me say that this session is different than the last, which I enjoyed very much. This one has a heady..I have my Masters feel to it... and I submitted a poem last week that had the F word in it..twice...and this week I submitted the poem about Marilyn and the Kennedy brothers. No one comments much on my stuff..Oh well. The purpose is to write, right?

WHAT A DAUGHTER LEAVES BEHIND

I've kept the door closed, because
I am good at closing doors. A room

is not empty, if one does not enter.
My hand trembles at the knob. A knob

I have always hated. Note to self.
Replace all knobs in the house. The

house that holds one less. A daughter
who's walls are seafoam green,two different

shades, just hues apart. Subtle yet easily
articulated. These walls she left behind

hold pictures of butterfly winged alphabets
and towers, both Eiffel and Empire State.

Above me, hangs a crystal chandelier with one
bulb burnt. On the desk, stands a lamp

adorned with mardi gras beads, fastened
firm by a clothes pin, holding a memory I

did not witness. She's left behind clothes
in the closet which I picked for her, that

no longer suit the occasion.There's a guitar
she did not learn to play, and an antique ice

cream parlour chair, that I failed to re-cover.
I had promised, so she wrapped the cushion in

fabric and waited. Here is the doll from Africa
and the masks in Venetian red and kitten fur black.

Theses are the things.I can bear them all. It is the dust,
made from her skin that I can not bear. I could not

sweep it away. No more than she could part with those
roses,dried darker,but still from a boy she did not love.

Signs of the Times

I drop Maggie off at school each morning. I am usually dressed in a robe and sporting bed head. It's all I can manage most days just to stay on the road and avoid hitting deer. (This morning it was a "husky" well pointed buck..but I digress)

On the way,I pass all the lawn signs. Obama. McCain. In my neck of the woods, there are lots of McCain signs.Today,I whirled by one lawn that stood out,but there was no time to lose. High school and first period waits for no woman.

I was alone on my return trip, so I slowed to take a closer look. There stood multiple McCain signs...and one poster board,hand made sign, proudly proclaiming
"OBAMA... AND FREE SPEECH" in multicolored pencil.

Bad Poetry. Sure I have written my share..but never on purpose. I have written things not in my voice...but intentionally BAD..."So BAD, it's good." Tough. Then heap on top for good measure, make it a love poem. WELL NOW.

But only if bestowed
a corner piece, gaudy
with flourish,love laced
thick with sweet nothings;
tubed in abandon.
A lure to the greedy,
desperate to win any
prize. Craving it's
slick smooth taste
that coats the tongue
in surrender.The needy

are willing to swallow
the lies,devour them
whole, without chewing-
for fear of crushing
the truth, lurking
like a bitter pearl.
posted by wendy at 9:29 AM 1 comments

A Very strange workshop task indeed. Rhyme with preface......also rhyme was supposed to be subtle... but that was a little too much for me........so blatant it is. I am so blatant!


Why the Sky Is Blue and Other Dangerous Questions

The sky moves by, in fits and sputters
of grey or purple or coal miner black.
Darker for emphasis, stars as beacons.

The sky moves constantly with blue
just reflection of water. What then,
reflects in the black, I wonder?

The coal miners despair? And who supplies
the claret,murky merlot purple? Which
king dips his head in surrender?

I have met the grey before,as he mocks stars.
Those brave beacons,needing only contrast to shine.
Grey;a dull flat endless nowhere,in particular.

She never did believe
curiosity was conceived
to kill that cat.She disagreed

with it's very premise from the get.
To be free,released, yes, to let
go is danger fraught and yet

how thrilling! She could only dream;
to cross that path, to forge that stream
of thought and wish and will supreme.

To leave this plane of mortal piss
and cough and spew and toil, this.
Just cut it loose, with good bye kiss.

To venture where she did not know.
what lurks ahead? what troubles grow?
She'd gladly trade this earthly show

toss all grey tasks she'd known so far
to gamble on some distant star,
to throw the dice, or dodge the car.

She never did agree the cat did more
than take an odds on bet, before
banking on his lives in store.

Hers much more, a deadly game,
though it may appear the same
that damned cat, deserves the blame.

with a pic of the girls at the Cal game. Michael took Maggie to homecoming at Cal. I stayed behind to ride in our championships..more about that later... 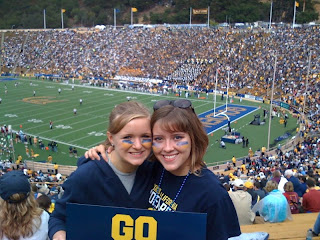 and pink cashmere
twin sets. he sees
her eyes as she
tries not to look.


She cups his
damp and fleshy
hand in hers.

instead of
turning left
she steers him right

past the bone
and ivory breast
balloons..hadn't he
once called them that?
when he was much younger..

Lacy and deflated
they scare him now.
Hollow and haunting

they Make him feel
lost and empty.
he looks nowhere but down.
Feet on the wide long isle.
he is a foreign lad
in a foreign land.

he lets her lead him blindly
past what he does not yet fathom
he wants, to the only department
he has ever known.

tucked forgotten in
the corner of
the half dressed
women and the broken
men.

Thanks to Joyce for the idea..

6 Unremarkable things about me:

One good thing that happened today...I went to a horse show...had some good classes myself...but the good thing was I got an update on a horse I used to own, about 10 years ago. He is the loyal mount now, of a short stirrup rider, about 8...bows and pigtails and all. Made me so happy. He's about 17 now and spends his days making his girl laugh.

He always was a good old boy. I'm proud of you Toby! (My Toblerone)
posted by wendy at 7:11 PM 2 comments

Each Penny Has Two Sides.

Excuse Me While I work Signs of the Times I Voted, Therefor I Am!!! Poetry Assignment Poetry experiment been gone..but I am back... poetry class poem Six unremarkabe things... You'de Think I Would Have Asked This Before... Girl, Interrrupted